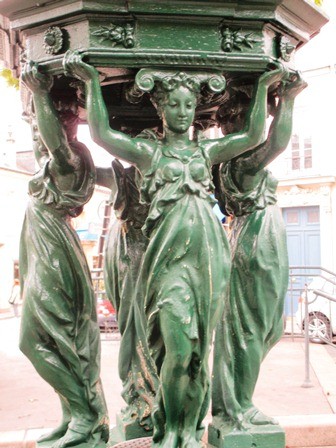 Bonjour La Ville-Lumière! And Paris truly is the city of lights. Thanks to my French editor Deborah and her kind husband, we got a driving tour of Paris at night. The Eiffel Tower sparkling into the heavens. Notre Dame, the Seine, Champs-Élysées, Basilique du Sacré-Cœur, skyscrapers and lush parks — all aglow in the city. It was a truly magical evening.

And my amazement has continued. The Louvre, Versailles, corner cafes, the cinema museum, pain au chocolate, street markets, bookstores, designer clothing stores … we have traveled by automobile, metro, train, and foot and still have only seen a tiny portion of all this city has to offer.

But as a writer, I found the most unexpected, delightful surprise when I walked into the famous Shakespeare & Company bookstore, an English language literary haven on Paris’ left bank. There among the stacks of books for sale was The Snow Child!

During the Festival America here in France, fellow American novelist Hector Tobar expressed it so well — with the long, celebrated history of literature here in France, it is truly an honor to be published here.

Merci beaucoup to the French translator Isabelle Chapman, the many people with the publisher Fleuve Noir and the French readers, bloggers and journalists who have welcomed The Snow Child to France.