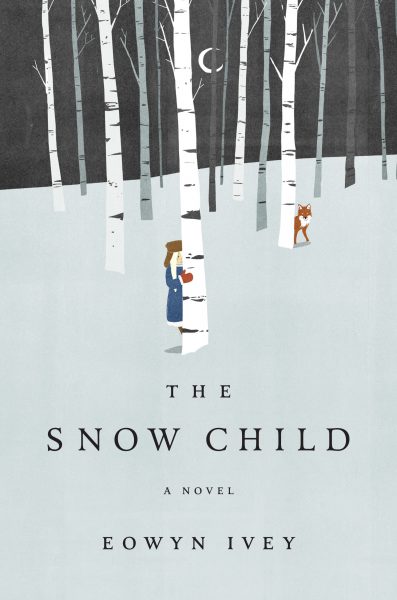 “Sad as the story often is, with its haunting fairy-tale ending, what I remember best are scenes of unabashed joy.”
Ron Charles, Washington Post

“A magical yet brutally realistic tale.”
O, the Oprah Magazine

“A stunning and startling adult novel, full of wonder, longing, hope, pain and beauty … Readers will be drawn in by the mystery and Ivey’s elegant language.”
Cleveland Plain Dealer

“Literarily, Ivey is to the natural world of the Far North what Charles Frazier has been to the south.”
Alaska Dispatch

“Ivey sets up the two most powerful forces in any story: fear on the one hand, potential for the miraculous on the other.”
Newsday

“The Snow Child keeps the once-upon-a-time quality of a fairy tale while just skating the edge of magical realism.”
Christian Science Monitor

“Ivey’s writing captures an Alaska that is at least as strong as any of the characters challenging the wilderness. She writes lyrically and lovingly of hardship, friendships, and the bond between neighbors.”
Denver Post

“Her prose is reminiscent of F. Scott Fitzgerald: seductive in its swift, punchy passages of dialogue and its descriptions of the ferocious, shimmering wilderness as a vivid character in its own right.”
Newark Star-Ledger

“Very rarely has the beauty and unyieldingness of nature been described so sensuously … a splendid, magical book.”
Book Page

“Ivey’s prose is all the more delicious because it is so seasoned with a place she knows and loves, yet she understands its dangers. A fabulous first novel … readers everywhere are going to enjoy this book.”
Yakima Herald-Republic

“A stunning debut novel … We drift in and out of uncertainty as the whole spellbinding story unfolds.”
Reader’s Digest

“This debut novel serves as a grand reminder of the beauty of winter – and the power of a single wish.”
Costco Connection

“But the moral is that all beautiful things are fleeting and finite, and people who gain joy from experiencing them shouldn’t feel too much sorrow for their passing.”
A.V. Club

“The book’s tone throughout has a lovely push and pull—Alaska’s punishing landscape and rough-hewn residents pitted against Faina’s charmed appearances—and the ending is both surprising and earned. A fine first novel that enlivens familiar themes of parenthood and battles against nature.”
Kirkus Review

“This is a wonderful book.”
Anna Fielding, Stylist Magazine, UK

“In her debut novel, Ivey has achieved what can often take half a lifetime for other writers. She has re-created an entire world—both physically and emotionally—and married them into a unique narrative of heartstopping beauty… It’s a triumph..”
Christie Hickman, S Magazine, UK

“It’s one of my favourite books of the year.”
Eleanor Levy, Bella Magazine, UK

“If Willa Cather and Gabriel García Marquéz had collaborated on a book, The Snow Child would be it. It is a remarkable accomplishment—a combination of the most delicate, ethereal, fairytale magic and the harsh realities of homesteading in the Alaskan wilderness in 1918. Stunningly conceived, beautifully told…”
Robert Goolrick, (A Reliable Wife)

“The Snow Child is enchanting from beginning to end. Ivey breathes life into an old tale and makes it as fresh as the season’s first snow. Simply lovely.”
Keith Donohue (The Stolen Child)

“This book is real magic, shot through from cover to cover with the cold, wild beauty of the Alaskan frontier. Eowyn Ivey writes with all the captivating delicacy of the snowfalls she so beautifully describes.”
Ali Shaw (The Girl With Glass Feet)

“…a treasure of northern style storytelling. Deep under the crust of snow and ice, beneath the surface of loneliness and longing, beats the passionate heart of Spring. Anyone who has known the duration of a long winter and the comfort of a good book by a warm stove will love The Snow Child.”
John Straley (The Woman Who Married a Bear and The Big Both Ways)

“The Snow Child is a vivid story of isolation and hope on the Alaska frontier, a narrative of struggle with the elements and the elemental conflict between one’s inner demons and dreams, and the miracle of human connection and community in a spectacular, dangerous world. You will not soon forget this story of learning to accept the gifts that fate and love can bring.”
Robert Morgan (Gap Creek)

“Eowyn Ivey’s exquisite debut transports the reader away to a world almost out of time, into a fairytale destined to both chill and delight. Her portrayal of an untamed Alaska is so detailed you can feel the snowflakes on your own eyelashes, even as her characters’ desperate quest for, and ultimate redemption by, love will warm your heart.”
Melanie Benjamin, author of Alice I Have Been and The Autobiography of Mrs. Tom Thumb

“Magical, yes, but The Snow Child is also satisfyingly realistic in its depiction of 1920s homestead-era Alaska and the people who settled there, including an older couple bound together by resilient love. Eowyn Ivey’s poignant debut novel grabbed me from the very first pages and made me wish we had more genre-defying Alaska novels like this one. Inspired by a fairy tale, it nonetheless contains more depth and truth than so many books set in this land of extremes.”
Andromeda Romano-Lax (The Spanish Bow and The Detour)