Home / Letters From Alaska / Did I “read” that book? 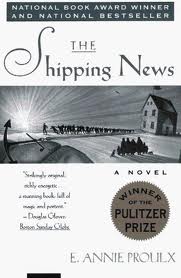 For years, when people asked if I had read The Shipping News by Annie Proulx, I would stumble around on my words. In fact, it was one of my favorite books ever, but somehow I felt like I hadn’t earned the right to say that. Because (this is where I lean in closer to you and lower my voice to a whisper) I listened to an audio version of it.

BUT it was unabridged, and I listened to every word, and if I sound defensive it’s because I am.

For some reason I’ve always felt like a cheater when I listen to a book rather than read it. In fact, I eventually read the print version of The Shipping News, partly because I loved it so much, but also because I didn’t want any more of those awkward social moments. Now I can state loudly and perhaps too emphatically, “Yes, I have read that.”

Yet I suspect it’s a silly, slightly snobby way of looking at books. Of course listening counts. And I know there are books I’ve finished and ultimately really enjoyed because it was an audio book. The Shipping News is one of them. Several people recommended it to me, but every time I started the first few pages, I found it so depressing I couldn’t go on. 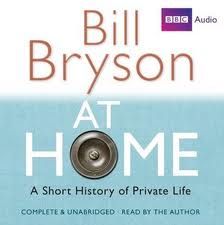 One winter I was running a trapline north of our home. I had an hour drive to get to the trail. To pass the time, I decided to listen to The Shipping News. At first it was sad and slow, but before long I was reluctant to leave the warm truck and incredible story when I arrived at the trail head. I would sit there for a few minutes, listening, before finally turning off the truck and putting on my backpack.

I’m not running a trapline this year, but for other reasons I’ve been making frequent trips to Anchorage. It’s about an hour-and-a-half drive, one way, from our house. So when I was at the Sutton Public Library the other day, I picked up Bill Bryson’s At Home on CD. He is an author I’ve always wanted to read, but I rarely make time for nonfiction.

The book was fascinating to listen to as I drove. I learned about how silverware first came into use, and how people’s fancy wigs used to get infested with vermin, and why concrete houses never became popular. Bryson’s voice is wry and clever, and he seems to let his curiosity carry him, and the listener, from one odd fact to another.

I was disappointed when it was over. But the next time I was at the library, I picked up the unabridged audio of In the Garden of Beasts, by Erik Larson. Again this is a narrative nonfiction, this one set in Germany during the rise of Hitler. It follows the fate of the unusual American ambassador to Germany at the time. Again, this is not typically my kind of book — I mostly read novels. But it is an incredible story, and with just two CDs left, I find myself bringing it in from the car each afternoon so I can listen to more of it while I wash the dishes.

Even as I’ve listened to these audio history books, I’ve read a half-dozen print novels. And I wonder if I’m experiencing them differently, the audio versus the print.

Do you ever listen to audio books?  And do you feel the same about them as print books you’ve read?