Home / Letters From Alaska / Won’t you join me in Twitterland? 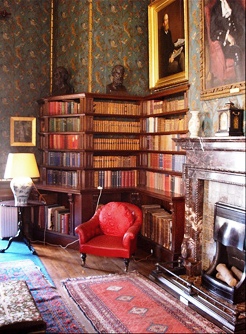 I've saved a seat for you at the party. This image is from Biblio-Files recent guest post on bookish places in England.

I know I’ve mentioned in my earlier letters how the upcoming publication of my first novel has opened new doors for me. It’s meant a couple of trips to New York City, a few speaking engagements, an interview or two. It’s all been very exciting. But someone is opening an entirely new door for me next week, the door to Twitterland. I have been asked to participate in my first “tweet chat,” and I’m hoping you’ll come along with me.

Last month, Biblio-Files blogger Kelly Ryan Kegans contacted me to see if I would like to participate in her #BiblioChat. Of course I said yes — her website is fantastic, and I enjoy her tweets. It was only later that I realized I wasn’t entirely clear on what I was agreeing to do.

Because I’ve attended blog discussions before, where people ask questions and talk via the comment section of a blog post, I assumed that was how we’d do it. But I wasn’t positive, and since I’m the guest, I figured I ought to make sure I had directions to the party.

Kelly kindly explained that no, the discussion would be happening instead on Twitter itself. By using the hashtag #BiblioChat on each entry, people can follow and participate in just that discussion, without being interrupted by all the other chatter on Twitter. She explained that I can also use tweetchat.com in order to simplify it.

I’m really hoping you’ll join us. Just go to twitter.com and set up an account if you’re not already on there. Then on Tuesday Sept. 6, at 7 p.m. Central time or 4 p.m. Alaska, do a search for #BiblioChat. You’ll see a running tab of the discussion. And if you want to comment, just include the #BiblioChat in your tweet so that everyone will be able to see it as part of the discussion. You can also go to tweetchat.com and use it to filter out any other tweets going on, and just focus on our discussion.

We’ll be talking about The Snow Child, which Kelly is reading right now, as well as my life here in Alaska as a bookseller and writer. If you tune in, you’ll be able to ask your own questions and share your own thoughts as well.

For those of you who are not already on Twitter, I know I’m asking you to drive with me down an unmarked, dark road to a party at a stranger’s house. But I also know it will be a ton of fun, and Kelly will put us all right at ease. A person who has such wonderful taste in libraries and books surely will be a great hostess.

So mark your calendar and say you’ll come along with me to the party — Sept. 6, 4 p.m. Alaska time.

P.S. Everyone who participates in Tuesday’s tweet chat will be entered in a drawing to win an advance reader copy of The Snow Child.